The History of the Exclamation Point 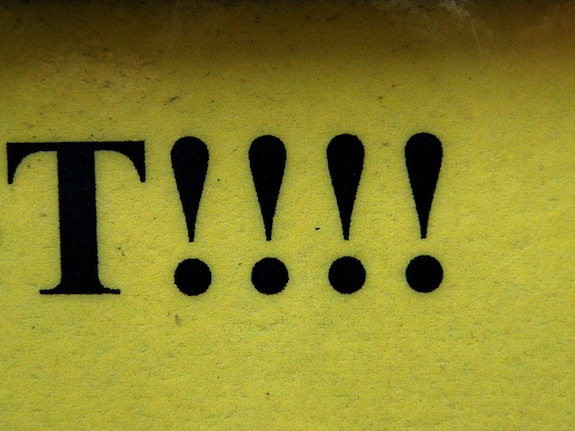 Everyone likes to complain that we’re using too many exclamation points these days. Here’s where the punctuation came from.

Hey!! Have you noticed that everyone who emails you seems to be super excited all the time!? Those are some perky emails!!

Maybe it’s because, online, we can’t really convey what we mean. Or maybe we’re all just way perkier these days! But whatever the reason, the exclamation point is creeping into nearly every online interaction. And everyone loves to complain about it. But where did the punctuation come from in the first place, and are we really over using it?

Everyone seems to have their own rules about the exlamation point in online correspondence. Some will only use one, at the end of the email. “Thanks!” Others use them in the subject to convey importance. Others use them willy nilly, like they’re the most excited and happiest person in the whole world. At the New York Times, opinion writer Ben Yagota learns another rule about exclamation point usage:

A friend’s 12-year-old daughter once said that in her view, a single exclamation point is fine, as is three, but never two. My friend asked her where this rule came from and the girl said, “Nowhere. It’s just something you learn.”

But where did the exclamation point come from? Any why  does it seem to be creeping into everything we do?

urns out, no one really knows the history of the punctuation mark. The current running theory is that it comes from Latin. In Latin, the exclamation of joy was io, where the i was written above the o. And, since all their letters were written as capitals, an I with an o below it looks a lot like an exclamation point.

There are even a few places with exclamation points in their names:

But complaining about this incessant exclaiming isn’t new. The Guardian quotes several writers who are less than pleased with the punctuation mark.

Elmore Leonard wrote of exclamation marks: “You are allowed no more than two or three per 100,000 words of prose.” Which means, on average, an exclamation mark every book and a half. In the ninth book of Terry Pratchett’s Discworld series, Eric, one of the characters insists that “Multiple exclamation marks are a sure sign of a diseased mind.” In Maskerade, the 18th in the series, another character remarks: “And all those exclamation marks, you notice? Five? A sure sign of someone who wears his underpants on his head.”

Sometimes, those exclamation points do their job. Victor Hugo once sent a telegram to his publisher that simply read “?” to which he received back “!”. Hugo wanted to know how his book was doing, and it was doing quite well. There, the exclamation point serves its purpose.

But today, The Guardian and the New York Times both argue, we are overusing our exclamations. There is even a blog chronicling the incessant use of the bang, called Excessive Exclamation!! Maybe they’re right, or maybe we all just need something to argue about. Discuss!!!

Brought to you by www.sierra-editing.com , at your service. September 25, 2018