These are the world’s most spoken languages

La langue, Sprache, 語言.However you say it, we all speak at least one. In fact, more than a quarter of us speak one of just three languages as our native tongue, according to data from Ethnologue, a database of languages.That’s three languages between more than 2 billion people.Those three, and the rest of the top 10 most spoken languages in the world, are all visualized in this chart by Statista. 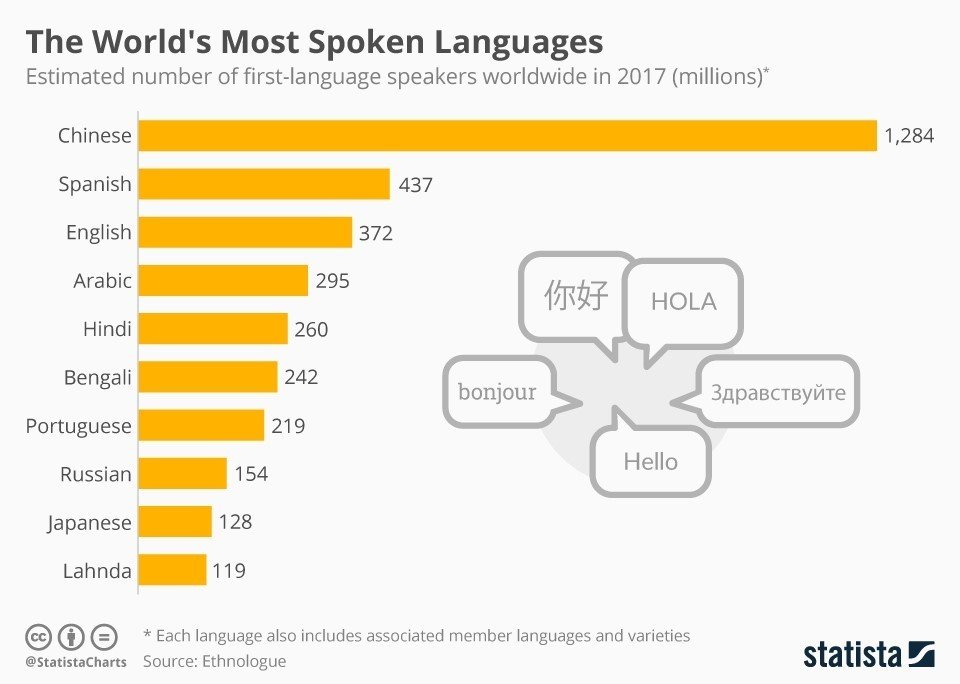 Chinese leads the way It’s probably no surprise that Chinese tops the ranking. Nearly 1.3 billion people speak a variation of Chinese as their first language. This aggregation includes more than 10 varieties; some that you’ve heard of, such as Mandarin, and others, such as Pu-Xian, that you might be unfamiliar with.Spanish takes second place – and you’re part of a big club if you speak it: 437 million other people, primarily in Spain, Latin America and parts of the US, are also members.English takes bronze, although it’s far more widely spoken than Spanish or Chinese, according to Ethnologue. English is established in 106 countries, compared to 37 for Chinese and 31 for Spanish.

It’s worth remembering, though, that these numbers are always changing, and our knowledge of the world’s languages is constantly being refined. The Ethnologue data represents one approximation of the situation.  Lonely languages  Speaking a language can be a lonely business.  There are over 1,000 languages with between 100 and 999 speakers, more than 300 with between 10 and 99, and 114 with nine speakers or less.  These 114 languages have so few speakers you could fit them in Barcelona’s Camp Nou stadium – 170 times.