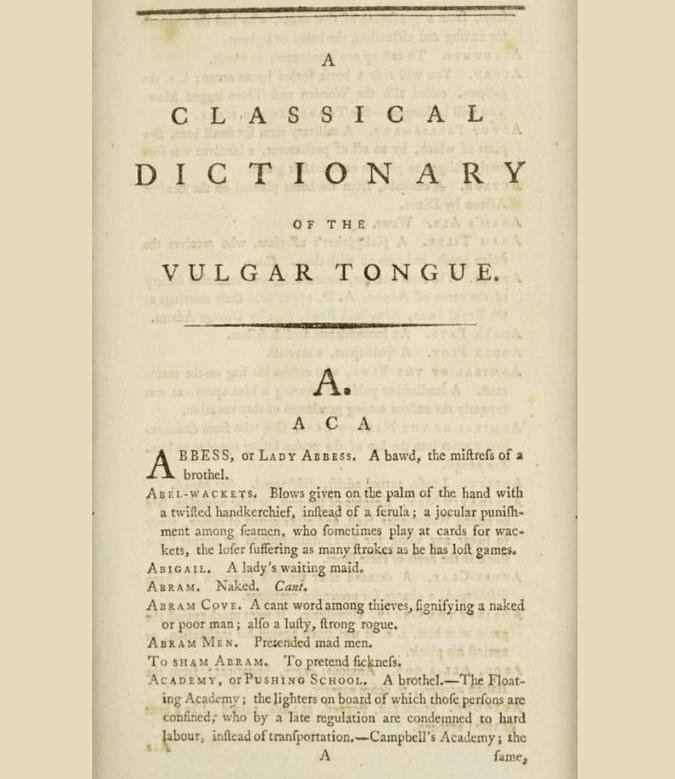 Did your mom ever wash your mouth out with soap when you were a rambunctious little scamp? If she did, you definitely know the childish joy of discovering "bad" words for the first time. Naughty language isn't a modern novelty, and a 1785 dictionary of vulgarities proves it. These bad words of the past aren't very taboo these days — just hilarious, and surprisingly important.

"A Classical Dictionary of the Vulgar Tongue" is, fortunately, exactly what it sounds like. Created in 1785 by Francis Grose, this book is a collection of more goofy vulgarities than you could ever come up with. Grose created his repository after being inspired, in a way, by Samuel Johnson's great "Dictionary of the English Language," published in 1755. Johnson left out a heaping pile of slang words and phrases that he didn't consider worthy. Grose, on the other hand, wanted to give those stragglers a home. And we're glad he did.

"He too was a lexicographer, and his achievements equally extraordinary," British language expert Susie Dent tells BBC Culture. "The two men even shared the same ambition: to record faithfully the English of their day. Yet their focus couldn't have been more different."

The Hero We Didn't Know We Needed

Slang words and vulgar terms may not belong in a proper dictionary, but they're just as much a part of everyday speech as any dictionary word. And that's why Grose's contributions, while seemingly silly, are valuable. (Quick shoutout to Grose's assistant Tim Cocking, too.) According to the British Library, "Grose was one of the first lexicographers to collect slang words from all corners of society, not just from the professional underworld of pickpockets and bandits." He was also one of the first writers to really explore popular culture at that time, Dent tells BBC Culture: "His was the first real 'underground' dictionary, compiled on evidence from the streets rather than the pages of literary works."

Though a lot of the phrases in this delightfully crude collection are old beyond recognition, there are familiar phrases in there too. As the BBC reports, Grose was the first to record the phrases "fly-by-night," "birds of a feather," "cat call," "kick the bucket," "chatterbox," "gibberish," and many others that probably wouldn't exist today had it not been for him. In the category of unlikely heroes, Grose is a standout.

The Other F Word

And now for some wonderful examples of vulgar words and phrases from Grose's famous work. If you want to read the whole thing, it's all been scanned here by the UK's Wellcome Library.

Want more old-timey vulgarities? Check out Max Décharné 's "Vulgar Tongues: An Alternative History of English Slang." We handpick reading recommendations we think you may like. If you choose to make a purchase through that link, Curiosity will get a share of the sale.

by Joanie Faletto in Curiosity blog

Brought to you by www.sierra-editing.com , at your service. February 4 2019